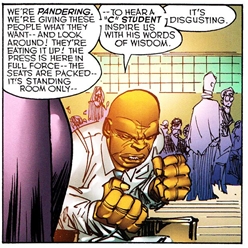 Mr. Apples was one of Malcolm Dragon’s teachers when he was in the Eighth Grade. He was not a fan of jocks, possibly out of resentment to being confined to a wheelchair, and took every opportunity to belittle Malcolm. When Malcolm was injured and recovering in Hillman Hospital, Mr. Apples was the only teacher not to grant him an extension on his homework deadlines. As graduation arrived, Principal McGee selected Malcolm to speak in front of his classmates, a decision that Mr. Apples strongly protested. He felt that Malcolm was not the right role model for the students as he seemed to be getting attention purely because of his appearance, powers and his famous father.

It was explained to Principal McGee by a colleague that the reason that Mr. Apples lost the use of his legs was due to an accident involving a student, This jock had hidden the fact that he possessed superhuman abilities and when he collided with Mr. Apples during a game, the teacher was left paralyzed. The animosity felt towards jocks in general and Malcolm in general intensified and these ill-feelings were clearly noticed by Malcolm. During his speech he noted that he was no hero, just someone blessed with extraordinary abilities who would do what anyone else would do given the opportunity. He instead pointed to Mr. Apples as the real hero, a man who would not allow Malcolm to coast by on his name alone but continually pushed him to become a better student. Malcolm thanked Mr. Apples and led a cheer dedicated to him before finally resolving any lingering issues between the pair.