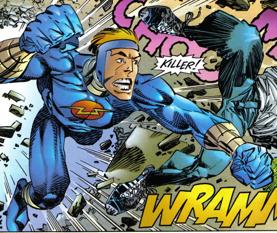 Shortly after Dragon was cleared for any wrong doing in the death of Solar Man, a young superhuman named Megaman decided to avenge the fallen hero. He attacked Dragon; causing destruction across Chicago in a vain attempt to bring his opponent to what he believed was justice. Unfortunately for Megaman, the battle spilled into the subway where he accidentally struck a live line and was electrocuted to death.