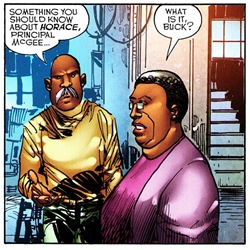 Principal McGee was the lady in charge of Rydell Middle School when Malcolm Dragon attended the school. She chose Malcolm to speak at his graduation, much to the protests of Mr. Apples. He had been paralyzed by a jock several years ago by a super-freak that had hidden his superhuman abilities. This brought on a severe dislike for people with powers and he was disgusted that Malcolm would be chosen to speak despite only being an average student. McGee dismissed the concerns of Mr. Apples and stuck to her original decision.