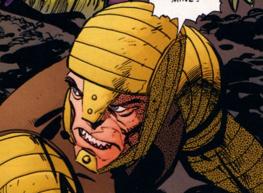 Just after Dragon arrived in his second reality he found himself under attack by numerous different individuals. One group of these assailants were the Rats, two of which were the siblings Goofus & Gallant. They shot down Dragon as he piloted a Sky-Rider’s steed and took the fight to the hero when he confronted them over their actions.

When the Rats abducted Rita Medermade in the Danger Zone, Goofus was one of those that battled against the Liberty League to try and eject them from their territory. The Rats were eventually sent into retreat by their opponents’ superior strength. A few years later, Goofus & Gallant were sought out by Solar Man for execution.