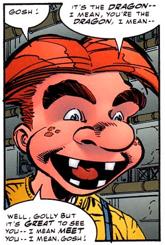 When Dragon found himself in Pittsburgh, he was kept hidden from CyberFace’s camera network by a number of locals. Buster was the young boy that led Dragon to the giant robot named Dave. He was very excited about meeting the hero, barely able to control his enthusiasm.