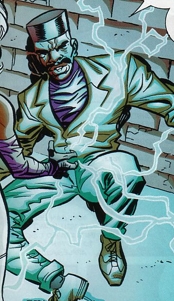 Bryan Louis Leroy Walker was a pimp who ruthlessly lorded over the prostitutes that worked for him. He one day beat to death one of his employees, Tracey Brown, with a baseball bat which caused the woman who was known as Rapture to flee for her own life. After she gained powers, Rapture returned to confront Walker. She would have simply murdered her pimp but the intervention of the teenaged Ricochet meant that although Walker was still killed, it was now a self-defense charge due to Walker firing a gun.