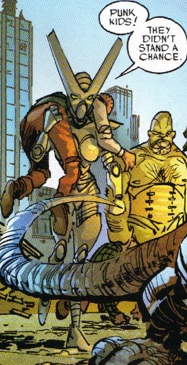 Victorious was one of the many freaks brought into the Vicious Circle during the reign of Buster Justice. She was part of the squad under the command Dart II when she abducted both of Dragon’s children. This group were defeated by Dragon and the Golden Age Daredevil as the two heroes became friends and allies. She is present when Dart II berates the VC for not finding Malcolm. When a group of Vicious Circle members attack a monster Malcolm Dragon she is killed when Malcolm slams a giant boulder on her.