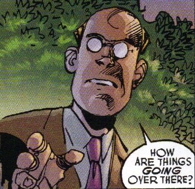 Shortly after the decimation of the Chicago Police Department, the authorities set about putting together a new precinct. As veterans and rookies alike were brought in, Gus Turpin became the new captain of this new precinct. He paid a visit to Dragon who was in Hillman Hospital recovering from his latest injuries. Captain Turpin was assaulted by the monster Virus who proceeded to eat his brain.