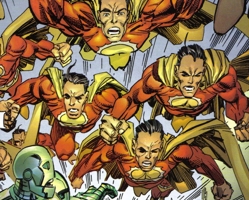 The Solar Man Robots were an army of androids created by Solar Man to serve as guardians to his Citadel of Seclusion, a regular brownstone exterior that contained a high-tech interior. When Rex Dexter broke into the fortress with ShadowHawk, the younger hero activated an electrical disruptor that deactivated the Solar Man Robots.