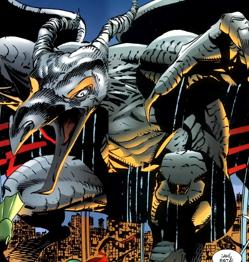 The Living Gargoyle was an ordinary stone gargoyle that was animated by the magic of Virago to bring her elderly people whose life-force she could consume, empowering the sorceress. It was confronted by Dragon and the Teenage Mutant Ninja Turtles who combined their efforts to hold off the creature before Dragon delivered the final blow.