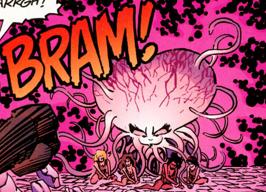 Following his harsh arrival in the Savage World, Dragon was thrown into one battle after another before finally getting a much needed rest in an abandoned basement. Dragon was dragged away by the food-hunting leeches that served the Brain-Child. This super-powered infant attempted to feast upon the hero but Dragon escaped with the liberated slaves of the Brain-Child.

Years later, Dragon and Jennifer Dragon were dispatched into the Danger Zone to deal with a number of females abducted. They discover that the Brain-Child is responsible and get into a battle with the creature. Dragon was endangered which forces Jennifer Dragon to take drastic action, using a piece of rubble to pummel the Brain-Child to death.