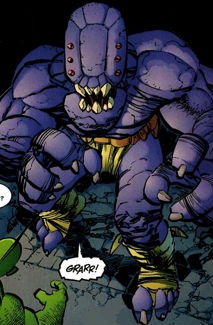 RudeHead was a member of the Rats, one of the factions of super-powered freaks that populated Chicago during the reign of CyberFace. He was the toughest member and would spearhead their attacks on potential prey. Dragon clashed with RudeHead shortly after his arrival in his new reality, following a clash with Damien DarkLord.

A later fight with Dragon featured RudeHead destroying the hero’s flying car with a flying boulder that he had thrown. The villain was later apprehended by the Billy Berman Mighty Man which meant that he was not present when the Rats teamed up with the Demon Dogs to battle a number of heroes in the Danger Zone. That fight ended with the Rats getting crushed by Red Giant.