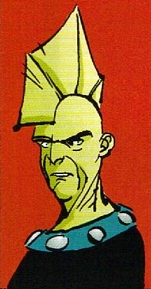 Rech was one of the chief scientists in service to his people’s leader, Emperor Kurr. He and his partner Weiko were charged with the task of finding a method of eliminating humanity so that Earth could become their new home planet. The pair refused to take part in the genocide of a sentient species and set about trying to prove that humans were not as undeveloped as Kurr had claimed.

A human subject was brought up to their spaceship and satellite television broadcasts were downloaded for study. However, Kurr dismissed all claims that humans should be spared and threatened death to his scientists should they refuse to obey his orders. Instead, Rech and Weiko betrayed their leader and shot him in the brain, destroying all of his memories. They then performed a vasectomy on him so that no heirs could be sired before transporting Kurr down to Earth, his head now filled with their recorded broadcasts. The duo then decided to blow themselves up to conceal the whole act, leaving their people to be cared for by Lorrella whilst the heir that they helped spawn grew up.