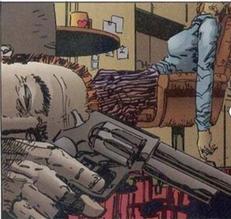 Meggan Tully was dating George Hill. One night she was abducted by aliens and impregnated but the event was wiped clean from her memory and she was returned to her car. When Meggan discovered that she was pregnant, it was assumed that George Hill was the responsible party, and the young man “did the right thing” by marrying his lover.

When the child was born, a disfigured freak, the devout religous couple was convinced that God was punishing them because they had premarital sex. They kept their daughter chained up like a dog in their basement with only a flickering television set to keep her company, resulting in her current simple nature.

After years of guilt and suffering, George and Meggan Hill took their own lives in order to escape their torment, abandoning their daughter to survive on her own. A paperboy came across the corpses of the married couple and fled when he heard a voice. Sara was eventually discovered by the Chicago Police Department and Dragon released her from her bonds and took her for emergency medical care.