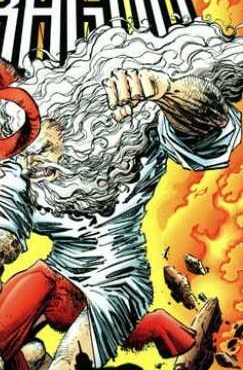 When the Bonnie Harris version of the Fiend was trying to find a way to send Dragon to Hell, she sought out the Unknown Sorcerer. He enabled her to make a deal with The Devil, sending Dragon’s soul to Hell despite him not actually being dead. The Fiend later decided to renege on the deal, causing The Devil himself to arrive.

The Devil attempted to claim Dragon himself but this merely enraged God, causing him to come down from Heaven in order to beat The Devil to a pulp. Dragon questioned God about his origins but could not get a straight answer. He explained how everyone’s afterlife is based on their own beliefs, noting that Dragon would enter oblivion due to his own atheist beliefs.