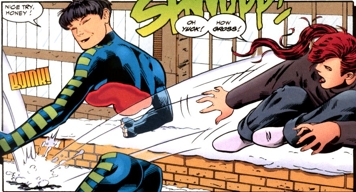 Flux created by Erik Larsen, with help from Keith Giffen and Victor Bridges.

Flux was part of a Covenant of the Sword strike team that was created by Johnny Redbeard on their behalf. They were ordered to eliminate SuperPatriot but their intended target was assisted by Freak Force in fending off the villains. Flux and her teammates later returned to the employ of Redbeard, now the Creator. They attempted to liberate him from Stronghold Penitentiary but were massacred by the Billy Berman Mighty Man.