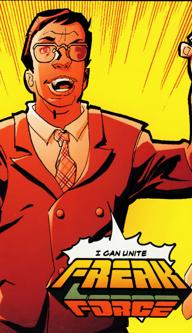 August De Blieck Jr was a wealthy businessman that became obsessed with reforming the hero team of Freak Force after reading about their adventures Dragon’s autobiography. This venture failed when the team’s exploits led to all of Augie’s wealth being used up, leaving him a broken man. Freak Force ultimately opted to disband for good.