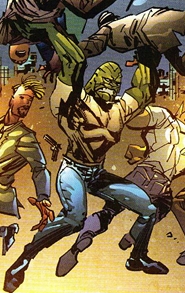 Crippler has been around in the super-freak community for many years but kept a low profile for much of it. He teamed with Bud Ugly for a caper before Antonio Seghetti had even become OverLord and formed the Vicious Circle. He was still amongst the ranks of the Vicious Circle years later when he accompanied FirePower on a bank heist. OverLord III foiled the robbery and he shot Crippler dead to rescue a hostage.