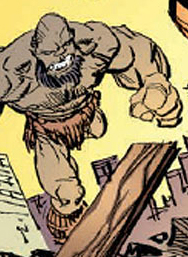 Caveman is present when Dart II berates the VC for not finding Malcolm. When a group of Vicious Circle members attack a monster Malcolm Dragon he is killed when Malcolm slams a giant boulder on him cutting him in two.