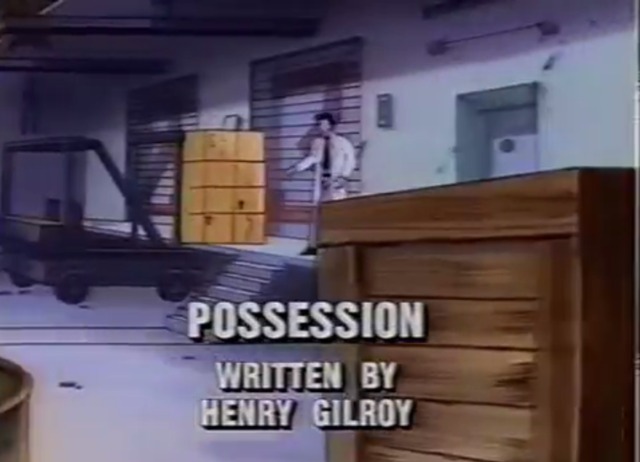 At the loading zone of the Merfi chemical lab, a small leech falls from the ceiling and attaches itself to the neck of one of the workers stacking boxes and seems to cause him intense pain.

Meanwhile across town, Officers Dragon and Alex Wilde are in pursuit of a stolen truck. Both officers are surprised when the truck pulls over as they were expecting more of a chase. From out of the truck steps a giant red freak named Barbaric who denies any knowledge of a stolen vehicle and isn’t even aware of the contents he’s delivering as he doesn’t even have a key to unlock the trailer. However, the young freak is eager to help and rips the lock off to reveal the truck is full of stolen electronics. Barbaric pleads his case, stating that he was just paid to drive and not ask questions since it’s difficult to find regular work when you’re a giant red-skinned monster. Dragon gives the teenager a lecture about making the right decisions and holds himself as proof that even freaks with bright colored skin can become cops in this town. Dragon believes Barbaric is innocent but still wants to keep an eye on him so he decides not to arrest him if he agrees to ride along with him and Alex as they go check in on a call that just came in.

The three arrive at Merfi to find 3 men in lab coats casually stealing containers of chemicals and moving them into vans. When Dragon tells them all to freeze, the men are unresponsive and continue robbing the place as if they’re in a trance. It’s only when Dragon grabs one of them by the shoulder that they begin to attack and put up more of a fight than their appearance would suggest. After Alex and Dragon knock them all out, they discover all of the men have small leeches crawling on them and proper identification that proves they work at the place they were stealing from. Another scientist comes up from behind the officers and is about to smash them with a barrel but is stopped by a very bored and very hungry Barbaric.

Later at the precinct, Lt. Frank Darling is shocked to see a strange red freak raiding the refrigerator and hauls him off to talk to Dragon to get some answers. Dragon and Alex both explain who Barbaric is and that he was told he could have a snack while they go over their case. Frank informs them that the chemicals are a rare but inexpensive form of high tech manure and the men stealing them not only work for the company but are model employees who would never be suspected of any criminal acts. All of the scientists claim to have amnesia and don’t remember anything since that morning and are at the police station being examined by a team of doctors. Dragon decides he has some questions of his own he’d like to ask them. Barbaric just wants more food.

Later at Vozburg Labs, Walt Gilroy updates Dragon and Alex about a group of employees tearing the place up inside stealing chemicals. Suspecting this incident and the one they dealt with earlier that day are related, they decide to bring Barbaric along as they look around for clues. Alex finds more leeches and one attaches itself to Barbaric’s neck, sending him into a furious rage. After a failed attempt from Alex to stop him with a forklift, Dragon steps in and the two freaks engage in a fight that causes severe damage to the lab. Frank arrives as backup and suggests Alex blast Barbaric with gas grenades to knock him out. As he slips unconscious, the small leech on his neck crawls away.

Barbaric wakes up with no memory of the fight that just transpired and finds himself restrained in a steel stretcher and placed under arrest. Dragon still believes he’s a good kid and assumes whatever caused the lab workers to go nuts must have also affected Barbaric. Frank isn’t sure but isn’t taking any chances. Alex sees another leech crawling around and follows it inside. It makes an attempt to attach itself to her but she tosses it into a nearby barrel full of lye which seems to instantly kill the creature.

Now behind bars, Barbaric still tries to convince everyone he’s innocent and Dragon wants to believe him because he doesn’t want to turn a young hopeful freak away from the system. Alex suggests the strange leeches they keep finding may be what’s causing everyone to lose their minds. Dragon and Alex go talk to one of the forensics guys who looked after their suspects and ask about the leeches that were found on the victims’ necks. He tells them he stuck the leeches in a jar, but that jar is now broken and empty. Dragon roughs up the doctor to see if there’s a leech on his neck but finds nothing.

The leeches are now on the loose throughout the police station and waste no time controlling the other officers. After being attacked by a group of mind-controlled cops and locking them in the men’s bathroom, Dragon and Alex are approached by Frank who tells them to check out Mirikami Labs while he takes care of the trouble at the precinct. Knowing those labs have been closed down for quite some time and suspecting Frank is under the control of a leech, Dragon and Alex pretend to follow his orders so he doesn’t get suspicious. The two duck around a corner and watch Frank release the trapped officers from the bathroom and make their way to the evidence room to take the confiscated chemicals. Dragon and Alex decide to follow them to see where they’re taking the chemicals and bring along a container of lye with them if they need to stop the leeches.

Frank arrives at the docks to deliver the chemicals to a cloaked figure covered in the leeches calling himself Horde. Dragon reveals himself as Horde explains he needs the compound chemicals to help reproduce his leeches at an accelerated rate. Dragon then sprays lye at the villain which begins to kill off some of the leeches. Alex, now clearly possessed, steps in the way and tells Dragon to join them. She and Frank wrestle Dragon to the ground and manage to take away his lye-gun. Horde moves in closer to shower Dragon with his leeches while explaining his plan to take over the city and eventually the world. Barbaric suddenly breaks through the roof and lends a hand, slamming Horde against a wall causing his body to break apart into thousands of tiny leeches. Barbaric helps Dragon remove the leeches from the necks of his friends but Horde gathers himself up and surrounds the heroes with an army of crawling leeches. Dragon leaps over the approaching infestation and gets his hands on the lye-gun once more and hoses them all down. He tells Barbaric to get Alex and Frank out of harms way while he takes care of Horde. Dragon smashes through the floor and sends himself and Horde crashing down to the lake below them. He swims over the his gun and gives Horde another blast of lye which disperses the leeches, leaving only a torn cape behind to float to the surface.

Once he’s back to the surface, Dragon thanks Barbaric for his help and Frank apologizes for the misunderstanding. Barbaric now sees that he can turn his life around and admits he broke the cell he was locked in and goes on his way. Sure that they haven’t seen the last of Horde, Dragon and his team leave the docks as one of the leeches crawls up from the lake without their knowledge.