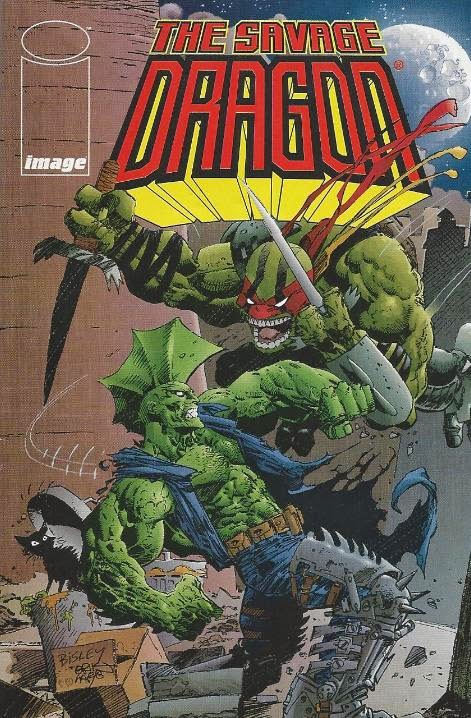 Dragon drives the streets of Chicago, test-driving his new experimental pursuit motorcycle when he is interrupted by police call informing him of a group of freaks fighting downtown. When he arrives on the scene, he finds Barbaric and a long-haired She-Dragon fighting the Teenage Mutant Ninja Turtles, who are all wearing brand new, high-tech costumes with cybernetic enhancements. After Dragon’s bike is destroyed during the battle, he recognizes Michelangelo just before a building falls on him. Leonardo uses his swords to cut She-Dragon’s hair into a mohawk. Dragon breaks out from under the fallen building and demands that everyone stop fighting, that they’re on the same side. Both teams of fighters mistook the other for members of the Vicious Circle. After a brief explanation from Leo that they came to town to rescue a friend of theirs from the clutches of the Vicious Circle, all the heroes join forces and run off to track down the team of evil villains.

This issue takes place outside of regular continuity.