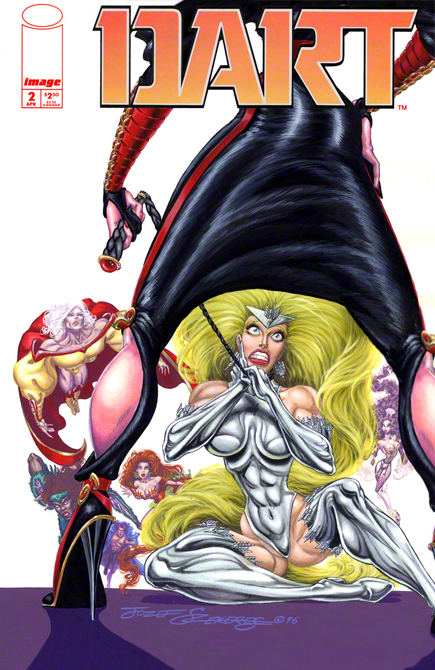 As she walks down the streets of Detroit in her civilian guise of Jill August, a crowd of children surround a toy store. She passes by but hears an advertisement that mentions the addition to the Blood Chic line of their new leader, Dart. The young vigilante is not the only person to react badly to this revelation as Blood Chic pay a visit to the office of Gregory Brockman. They are livid over their likenesses being changed for their new toys as well as the inclusion of a new member.

Death Gaze threatens to kill Gregory and lifts him up into the air but the businessman points out that the building is under surveillance and this altercation is all being recorded on video. He reluctantly puts down the arrogant man who then unveils five models that he has employed to play the parts of Blood Chic. He no longer needs the genuine articles and dismisses them. They are issued with a restraining order to keep them from Galb Toys and leave, passing Dart on her way into the building.

Both the Blood Chic and Vogue Attack teams experience some down time as Dart barges into the office of Gregory Brockman. She confronts him over her costumed identity being stolen for his toy line but is informed that she has no legal position to defend. Gregory claims to have copyrighted the Dart likeness a year ago and takes the heroine to meet his wife. Leah Brockman is forced to back up the claims that she designed the Dart character a year ago.

Dart recalls an incident from when she was at school when she witnessed a gym teacher bullying one of her classmates. She could not build up enough confidence to stand up to the man and instead fled from the scene. As this flashback ends, Dart turns round to Leah and states that she hopes she can stand up to her husband before too long. Dart is then threatened with legal action should she continue to operate under her existing costumed identity.

As she makes her way back out through the building, Dart comes under attack by Vogue Attack. She is distracted by the stench of Swamp Gas which enables Carpenter to throw large pieces of equipment at her. Dart then leaps clear of a lava bomb launch by Meteorite but is pinned to the ground by Walrus before she is tied to a conveyor belt by Mistress Brouhaha. She is then sent towards the machinery that seals toys in plastic which will suffocate her to death…